This review is loooong overdue!

First of all, I would like to thank the lovely people at Born Pretty Store for so kindly collaborating with bloggers around the world, including moi. Their vast selection of nail art supplies is a great resource to many of us and they always have promotions and offers to make us happy.

I would like to mention that some of the products in this post were sent as PR samples, where as others were bought by me.

Now, to the photos!

These are the plates I chose: 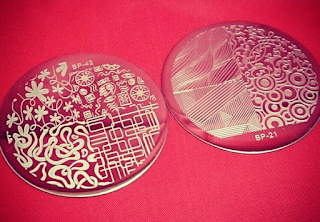 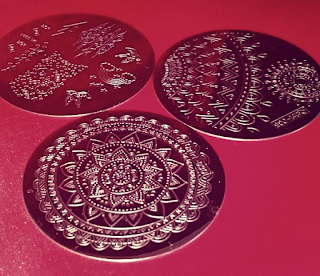 Born Pretty Store stamping plates have never disappointed me. You can see in the macros below that the images are sharp and easily picked up by the stamper. I love the fact that more and more plates have large patterns, I was often let down when Konad plates did not cater for my large nails. I also enjoy having the freedom to select different areas of the design without being restricted to a rectangle. So well done there!

The plates I used are Qgirl-030, Qgirl-035, BP21, BP42 and MLS301; they are VERY reasonably priced and you can get a 10% discount using the code NLPW10. Don't forget they have free worldwide delivery!

These plates did not appeal to me just for the designs, but also because there was enough space for reverse stamping, as I will show in the photos below: 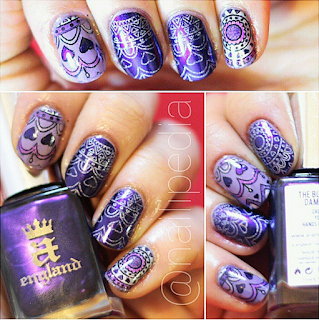 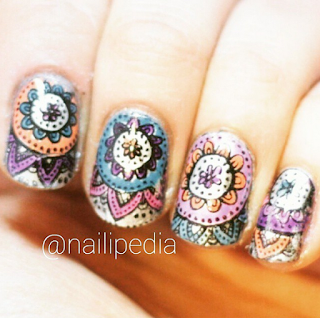 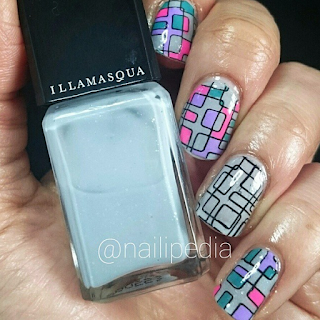 Reverse stamping is time consuming but I find it strangely relaxing.

Of course they are still great for normal, straight forward stamping: 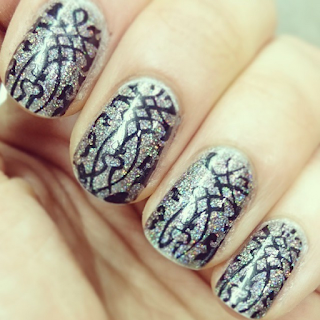 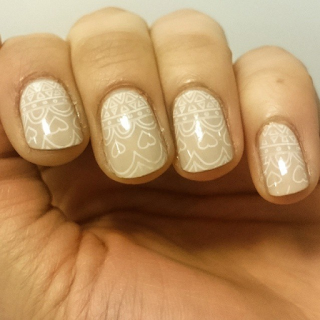 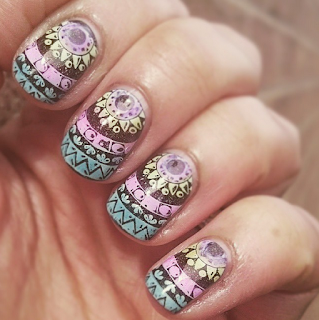 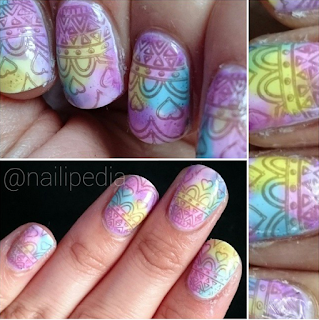 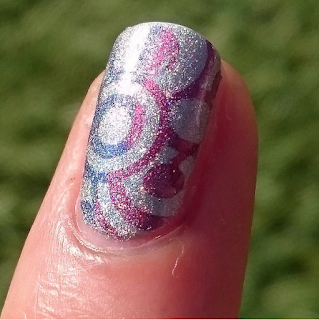 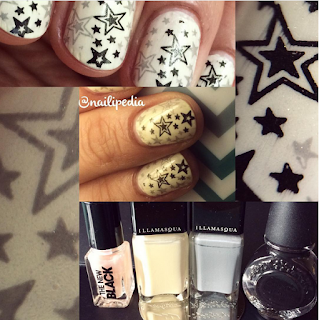 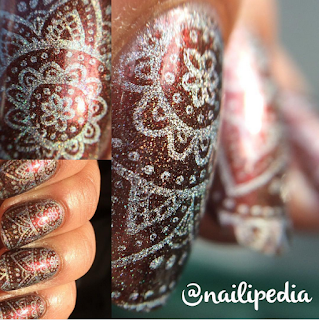 I mostly stamp using special polish, but have also used A England and Illamasqua for the photos above. Results were still neat and clear, these plates are so good I ordered some more for my sister.

Do you have a favourite?

Yesterday I received my much awaited Ubermat by Über Chic Beauty.
If you haven't heard of it yet, check out the video from UCB on YouTube. One look at it and I knew I NEEDED it, as did many other people, by the looks of things. According to UCB's website, the Ubermat is already out of stock until later this month. Good thing I got mine early!
I used it for a simple stamping job with my eldest daughter in the afternoon and waited until the evening for a proper test run. 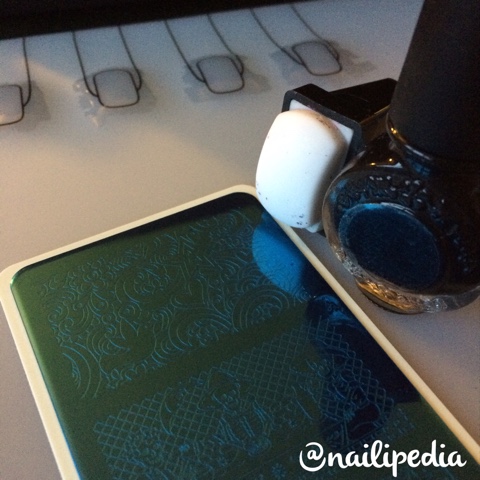 "Reverse stamp like a boss" is one of the USPs, and the one that appealed to me the most. The ten decent-sized fingers and nails on it give you a frame, and after putting some topcoat on them you're ready to go. Or so I thought.
The topcoat I used was Seche Vite. I'm not sure whether that had anything to do with my initial lack of success, or whether I was taking too long to do it, but by the time I was ready to stamp, my top coat was already peeling off and sticking to my stamper instead of staying put. 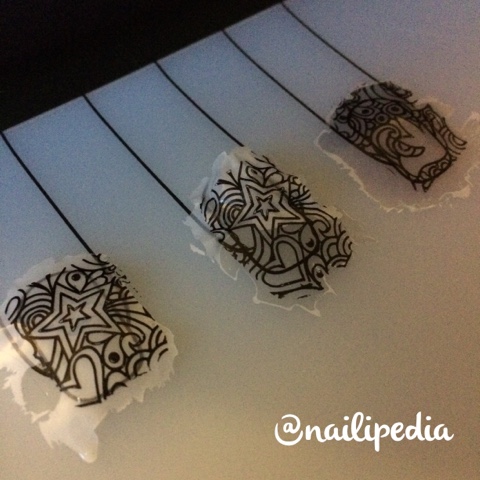 Stamping on the mat itself wasn't an option as the stamping polish did not stick to the silicone the Ubermat is made of.
I decided I wasn't going to let that ruin my excitement and gave it another try. After all, stamping hasn't always been easy for me. So I re did about four nails until I got the hang of it, in terms of speed and pressure.
Happier with the base of my decals, I took my time to colour the designs in. My only comment in this regard is that the black outline of the printed nails sometimes looked like the lines I was colouring within. But then again, it was late and a coincidence my frame was in the same colour.
Peeling off the decals was easy-peasy, I didn't even need tweezers. 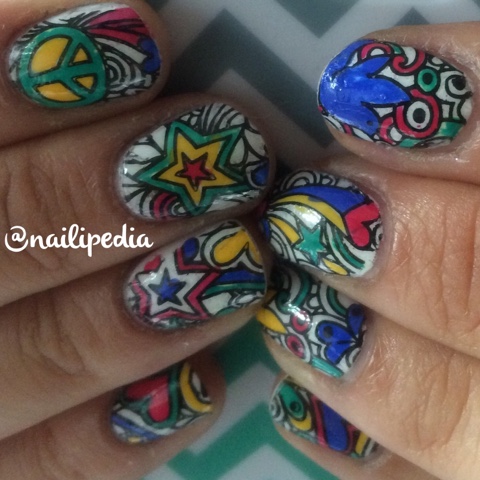 Check out the results by yourselves. What do you think? 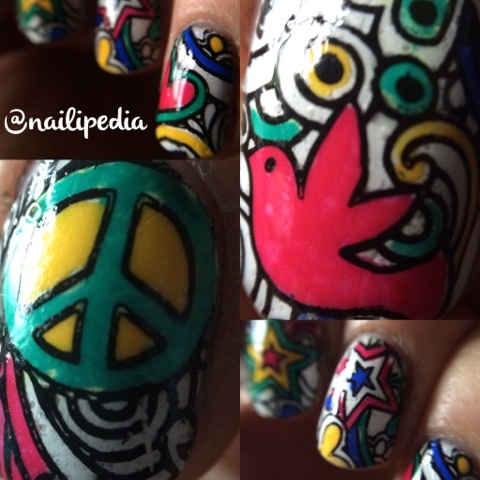 Stamping with Essie and Infinity Nails 22

¡Hola! It's been a long time since I've last posted anything here, but if you follow me on Instagram you know I am still around.
Today I would like to share my latest mani. Starting with Essie Maximillian Strasse-her, a favourite of mine, I decided to give Essie Nothing Else Metals a go, since my experience stamping with foils has been very positive in the past. 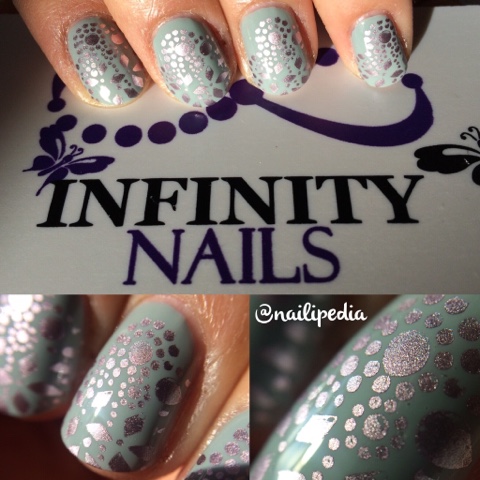 My friend Carolina and I placed our first order from Dashica Beauty Shop and I chose a few of the lovely nail stamping plates they have on offer. 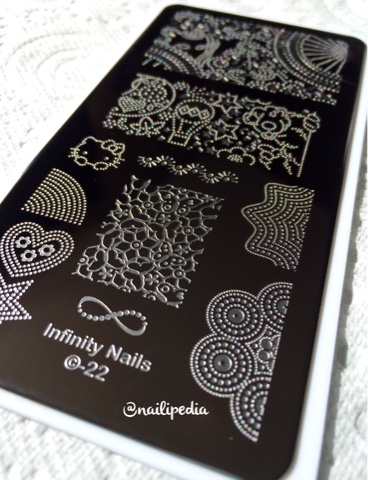 Despite being a big Hello Kitty fan, I did not buy Infinity Nails 22 for that reason. What attracted me to this plate were the cute dotty designs. Such images can be a bit tricky to pick up but I had no problems at all with this plate. 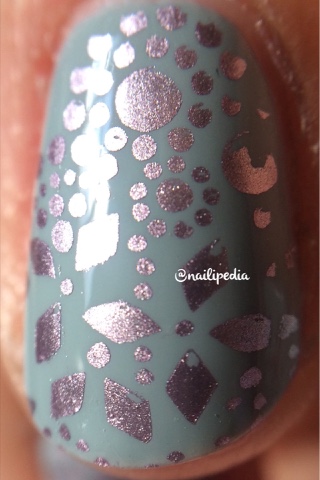 I think this is a lovely combination and am happy with the classy results. What do you think?
Check out this and other Infinity Nails plates on www.dashicabeautyshop.nl
Posted by Cecilia at 10:23 3 comments:

Pieces of My Heart

This year I am going all out for Valentine's Day! The next mani in the series is a freehand mosaic one I chose to call Pieces of My Heart due to general lack of creativity. 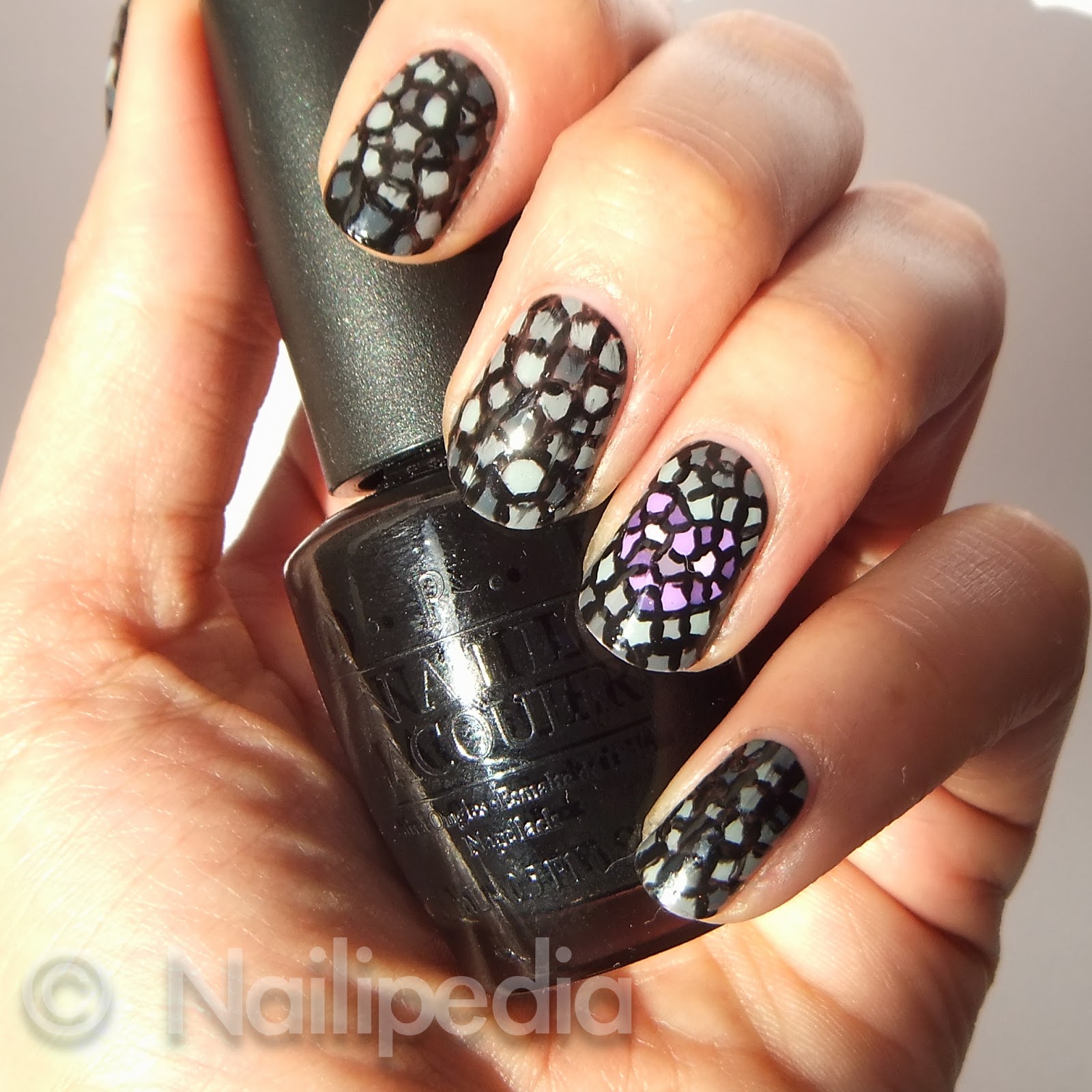 Mosaic nail art is not something new, but I hadn't done it before. I always thought it would be a bit of a pain but it was actually much easier than I had anticipated. I kept the colour scheme simple, going for creme greys and purples (which I happen to have quite a lot of). Maybe I should have gone for a more contrasting palette to get the heart to stand out more, but I often go for the more understated approach and this was no exception. Plus, I have been trying to stay away from the reds and pinks which are so often seen around Valentine's Day!

I traced everything with OPI Black Onyx and a fine nail art brush. 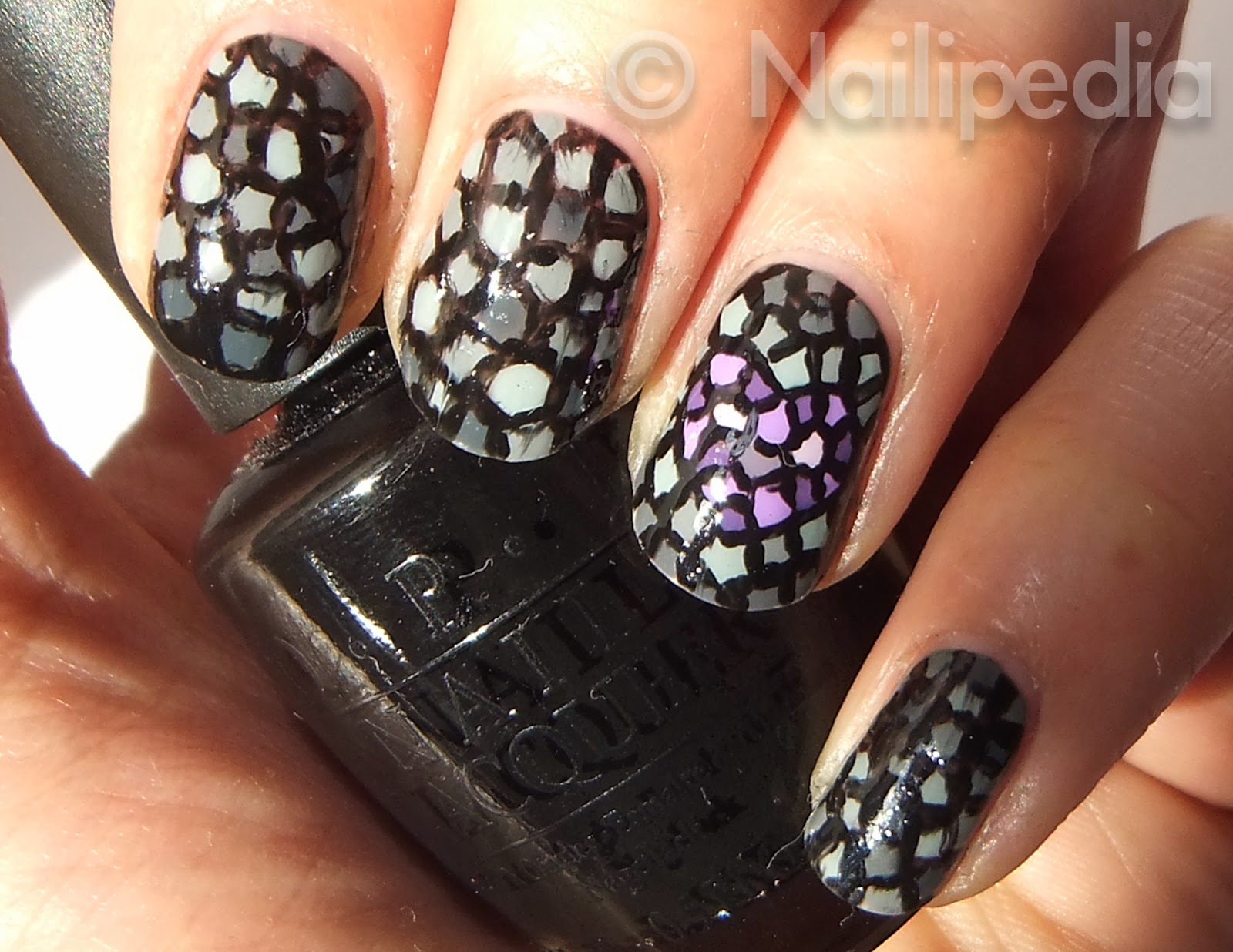 I drew the shape of the heart first in black, then I used a dotting tool to add circles of purple within the heart and grey outside. I used the nail art brush to "grout" them afterwards. On the other nails I didn't even bother with the dotting tool and just added shapes using the polishes' own brushes. Mine is not a mosaic you would find in a museum so I went for the organic approach. 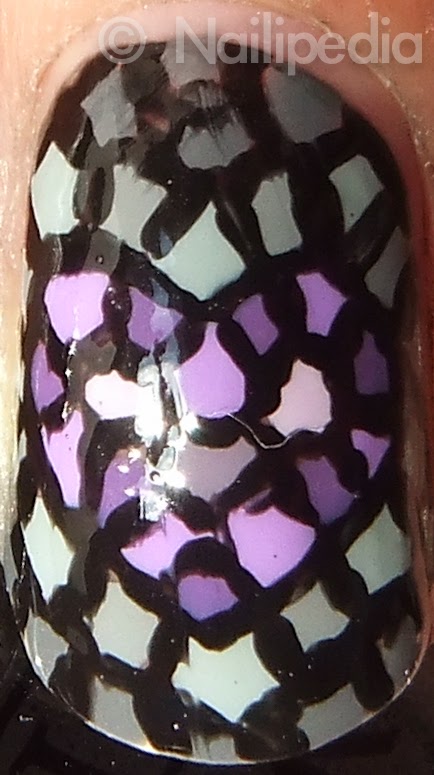 I sealed everything with Nails Inc Albert Bridge top coat. I am usually in a hurry to use my hands again and rush it a little, which you can see on the photos. 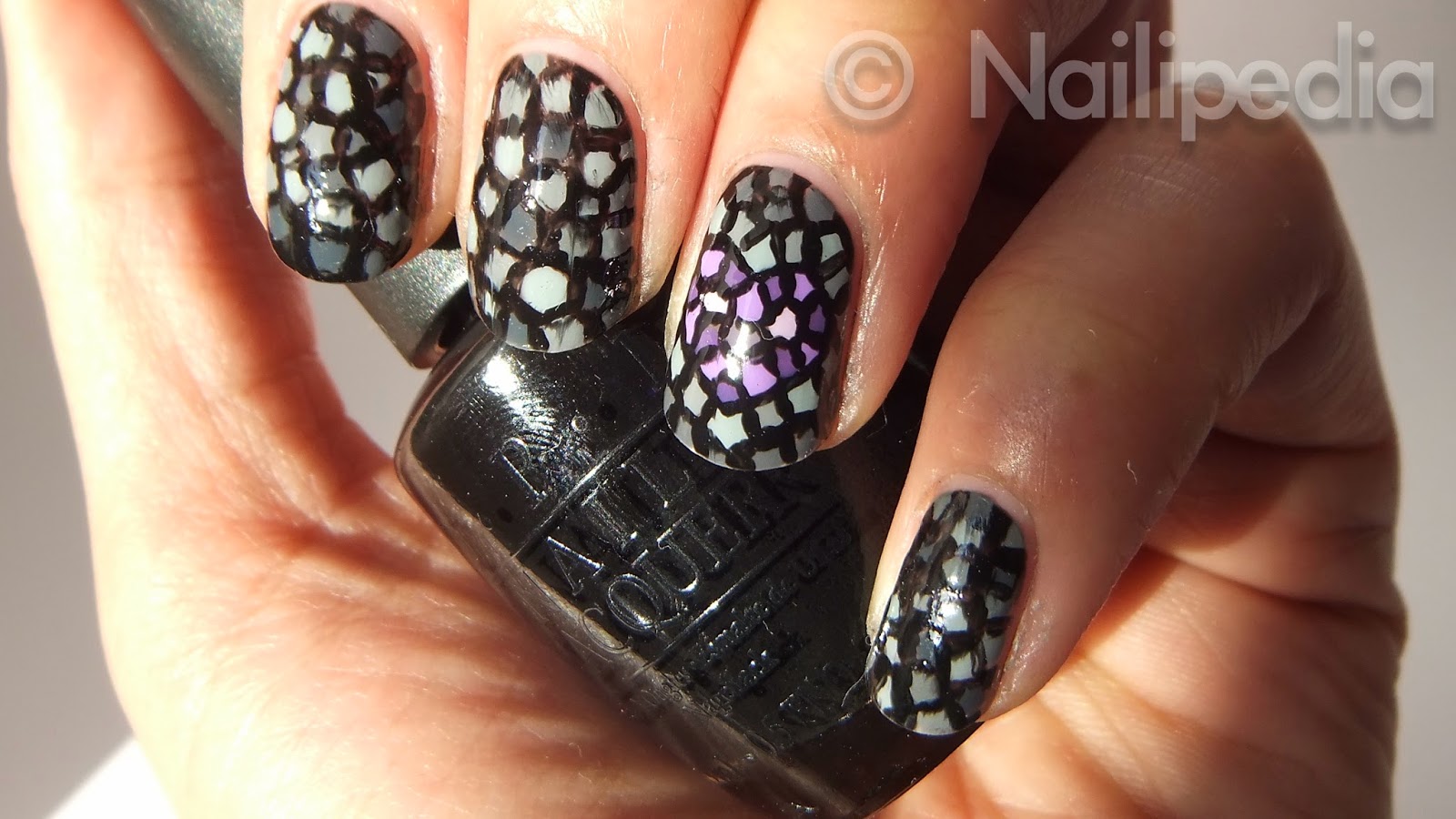 I really liked this nail art and will definitely be trying it again with different colours and designs. Have you ever tried a mosaic mani?

Continuing with the love theme, today's mani features something I am trying for the first time: nail tattoos! 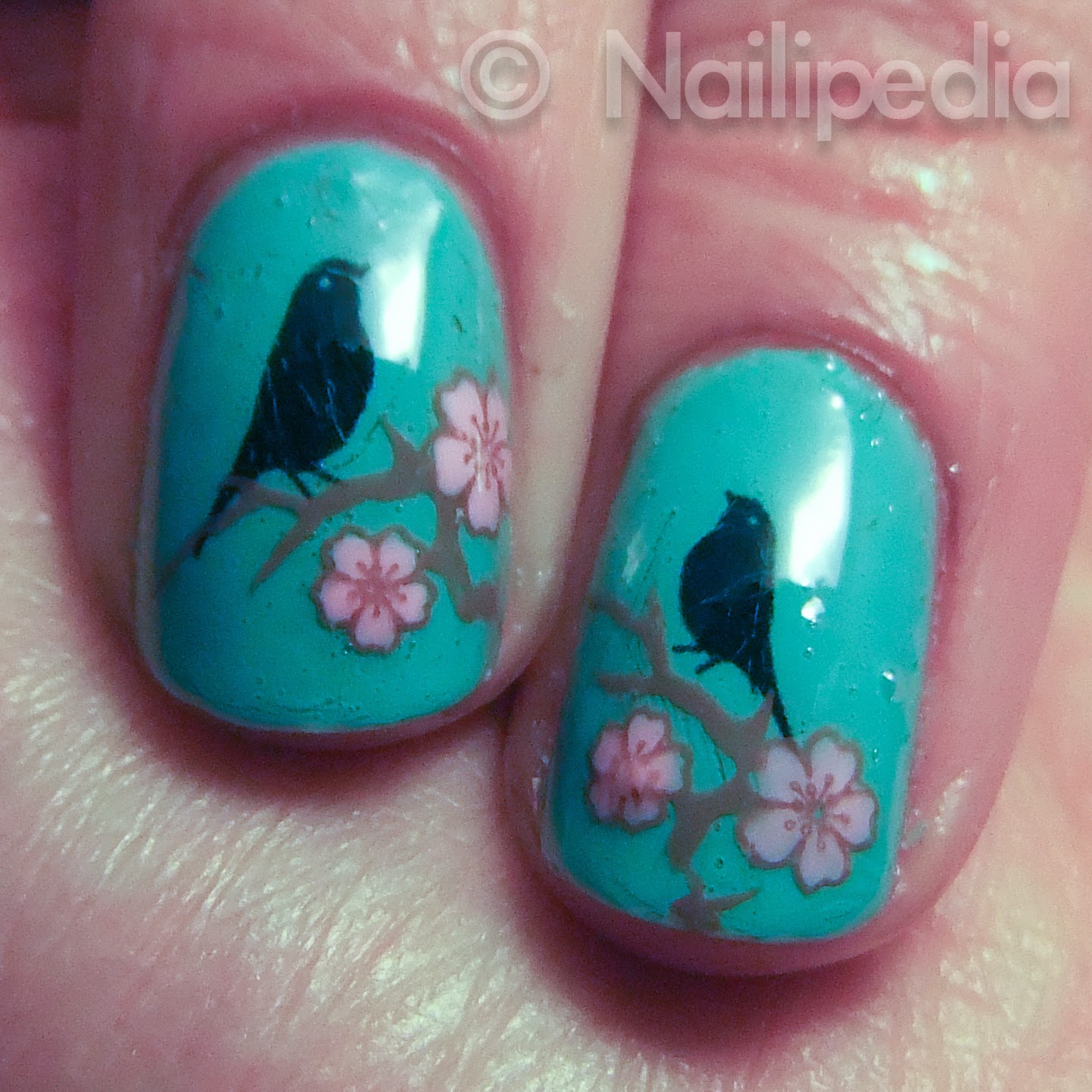 Hailing from Sweden, Fake Tattoos is the European leader in temporary tattoos. Their very high quality, non-toxic and hypoallergenic tattoos come in many designs and are super easy to use. I received the Bird and Arty designs, which was lucky because they were the ones I had my eye on. Each of these packs retails at £3.80 and they have between 72 and 80 images. They can also be used on skin of course. 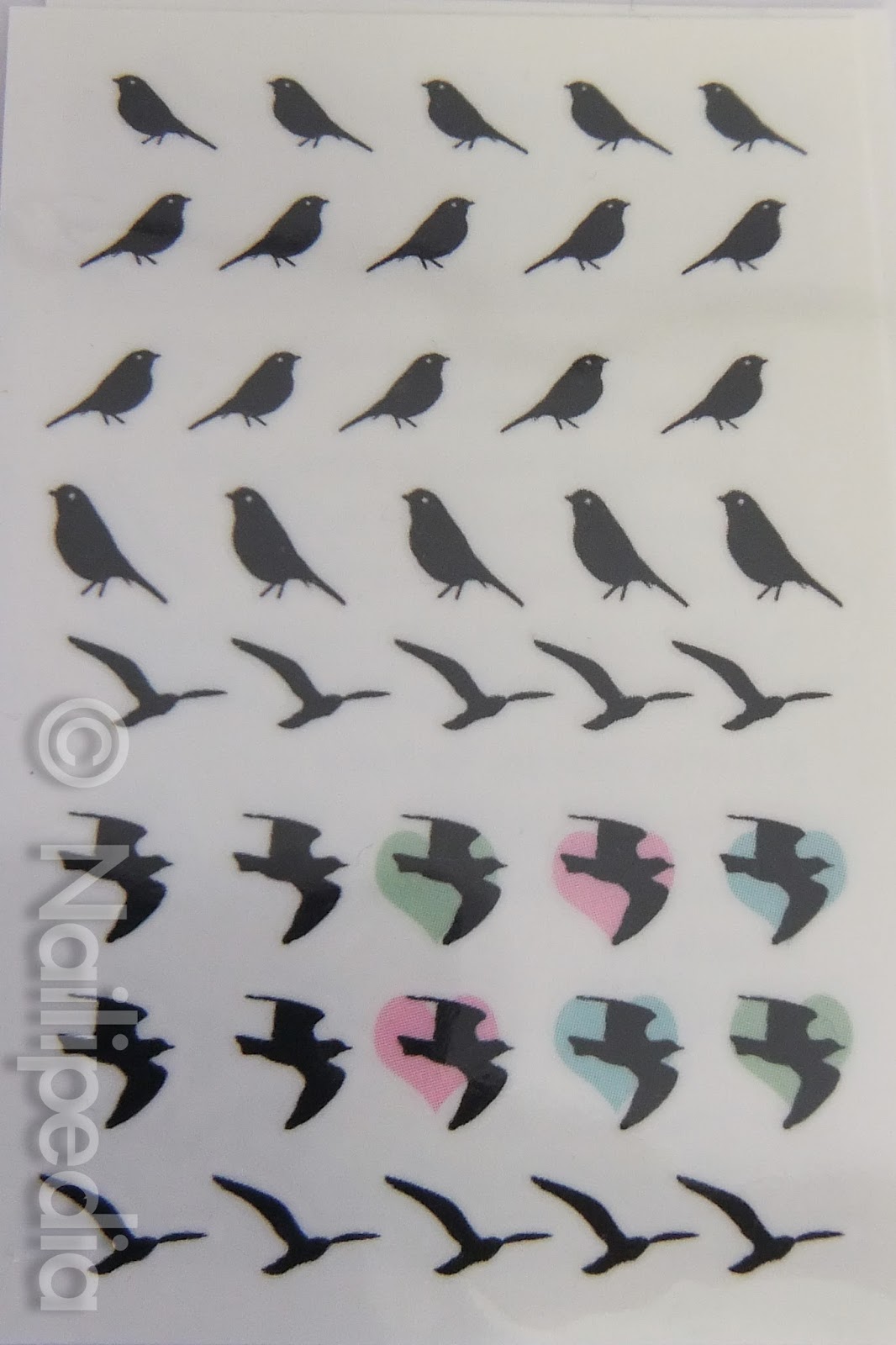 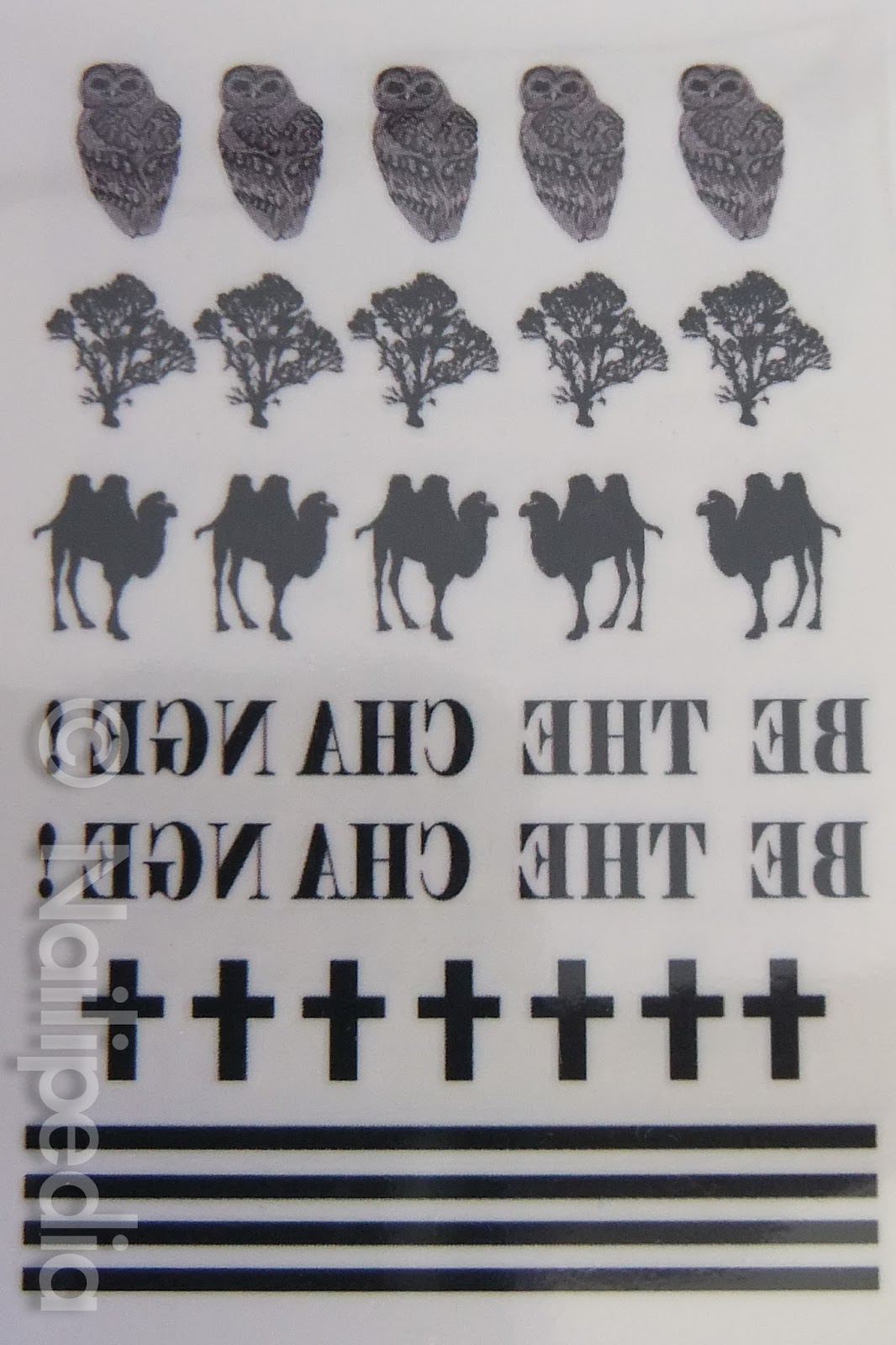 I remember using temporary tattoos as a child and more recently on my daughter. Application on nails is no different: you start with a clean surface, cut out the desired image, remove the plastic cover and apply the image onto the nail. Then you press a wet cotton disc against it and hold it in place for about 30 seconds. The backing paper is easily removed when the image has transferred onto the nail. Full instructions are below: 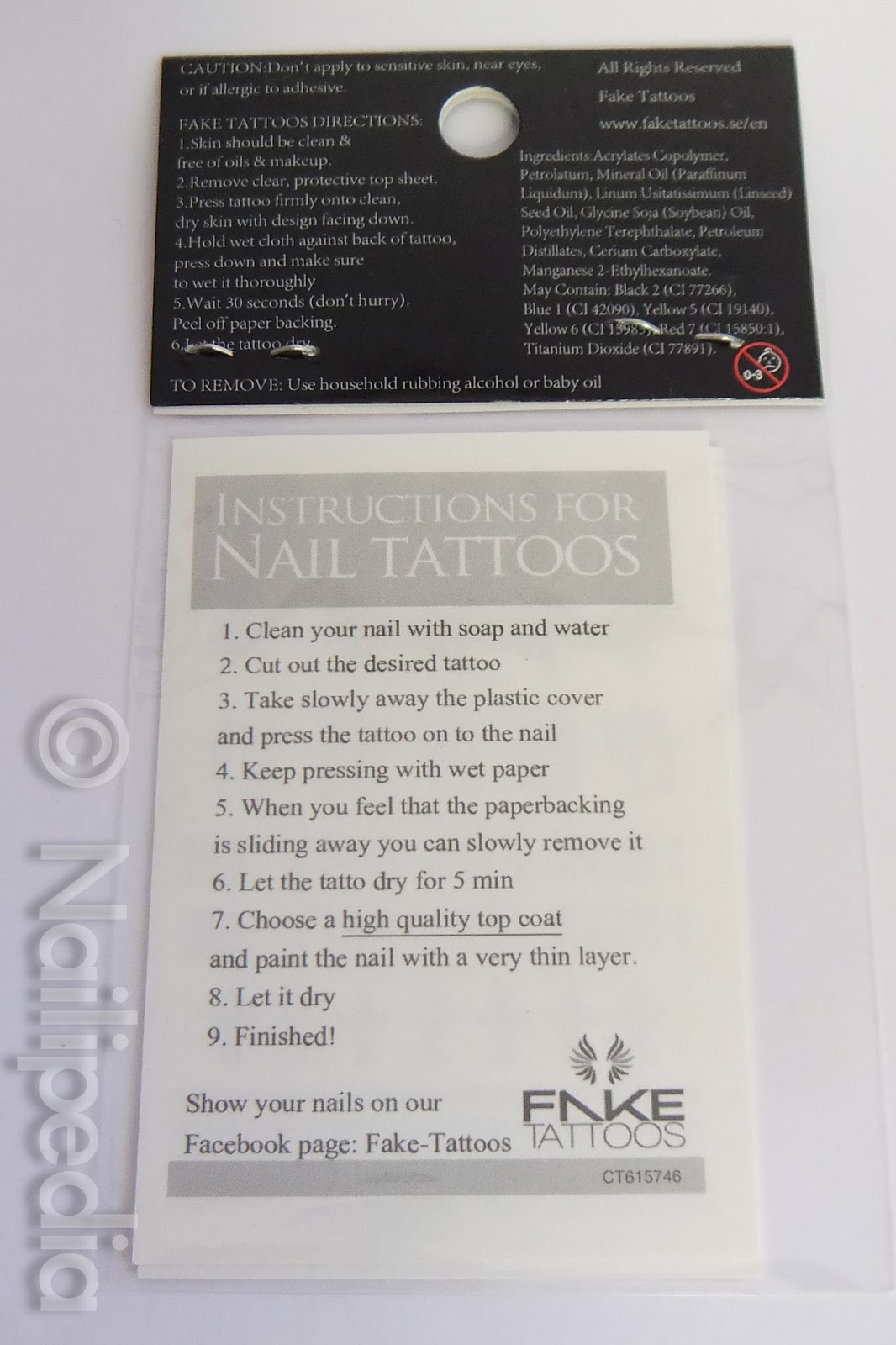 I would recommend handling the tattoos with tweezers, as they are pretty small and can be fiddly. These tattoos come off with water, so if you make any mistakes when placing them on your nail or are not happy with the results, you can start over after a quick wipe. However, it is vital that you seal the design with top coat once you are satisfied and it is completely dry. 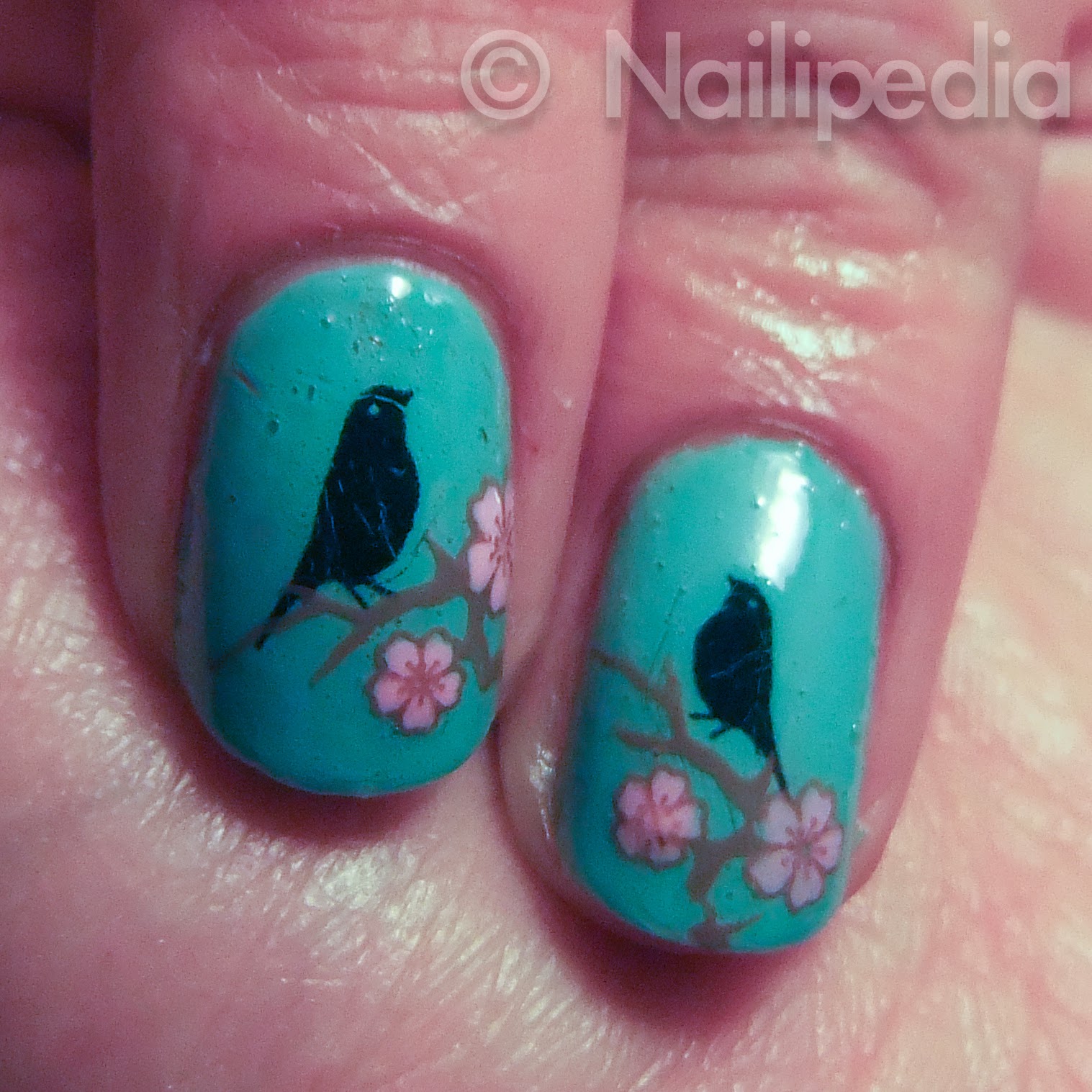 For my Love Bids mani I used China Glaze For Audrey as a base. Once my nails were dry, I placed the bird tattoos on my nails, following the instructions provided. I then created a stamping decal using the MoYou London Suki 01 plate to add the branches and cherry blossoms.

The remaining nails have different bird images placed on top of white stamping. 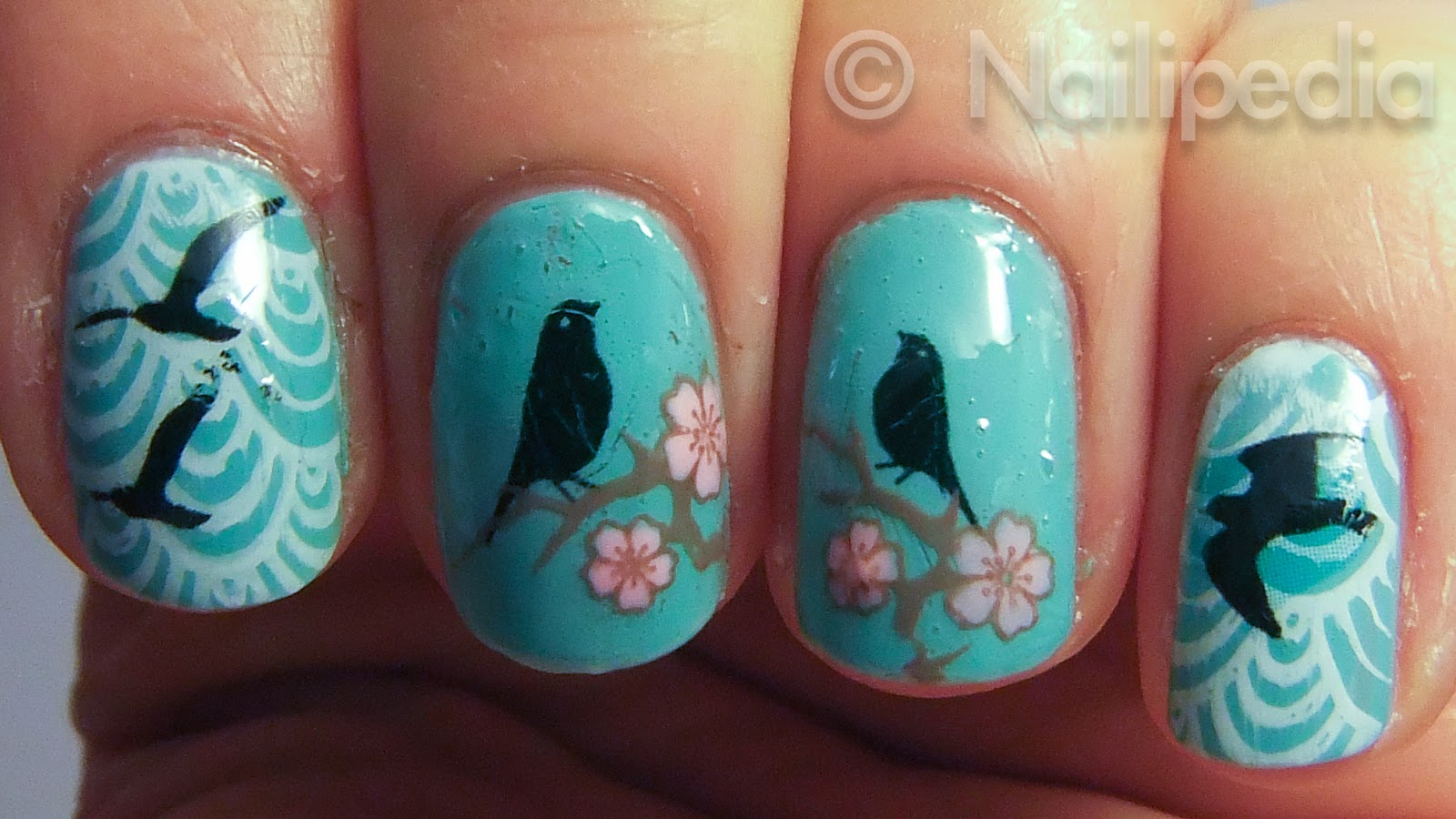 I was really pleased with the results. One of my Twitter friends said my nails looked like china and I can see why! Using the nail tattoos was fun and simple and I love combining different techniques like I did for this mani.


If you want to learn more about Fake Tattoos, find out about VIP discounts and order some of their products (they ship worldwide!), please visit them on Facebook or Twitter.